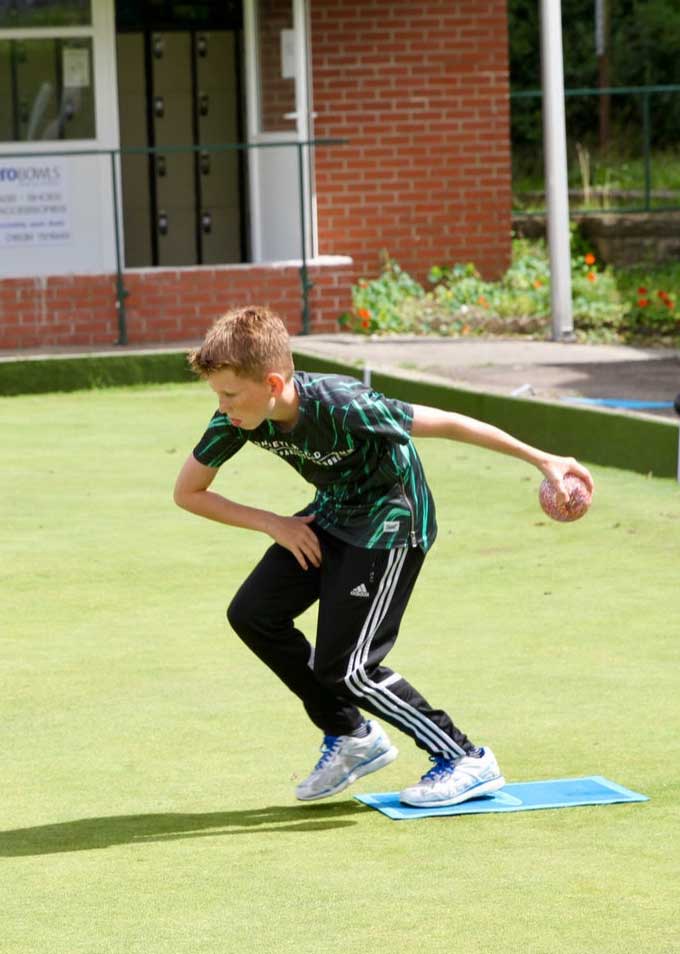 Are You New to Bowls?

Bowls is a unique sport.

It is fully inclusive and anyone can play it at any age, ability or fitness level - so why not start today?

Rules of the Game

Bowls can be played both indoors and outdoors, on grass or artificial surfaces.

Bowls is played on a square, level manicured grass or synthetic surface known as a “green”, which is divided into playing areas called rinks. The green is surrounded by a small ditch to catch bowls which leave the green.

The rules of the game are pretty easy – players take it in turn to deliver their bowls from a mat at one end of the rink towards 'the jack' (a small white ball) at the other end. The aim of the game is to get one or more of your bowls closer to the jack than those of your opponents on each end.

Despite the rules being easy, the fact that bowls are slightly asymmetrical in shape makes them hard to control with accuracy. They do not travel in a straight line, so it can take years of practice to expertly master bowls.

Bowls can be played in singles, pairs, triples and four-player teams (known as a 'rink').

Games are divided into what are called 'ends'.

To begin a game a coin is flipped to decide which team/individual goes first. The first player (the lead) places the mat and rolls the jack to the other end of the green as a target.

The jack must travel at least 23m and when it stops, it is placed in the centre of the rink, and all players take turns to deliver their bowls.

Sometimes bowls roll and fall into the ditch. These are considered to be 'dead' and are removed from play. However there is one exception - when a bowl has made a connection with the jack (known as a 'toucher'). 'Touchers' are marked with chalk and remain alive in play even if they fall into the ditch.

After all the bowls have been played, the direction of play on the green is reversed. This is the end of that 'end' (section of that game). The exercise is then repeated for the next end, across a designated number of ends.

When playing as a team, the 'skip', always plays last, and is key in delivering the team's strategy during the game.

Whilst Crown Green and Short Mat are considered similar to Lawn Bowls, they have some very different rules…

Short mat bowls sees players attempt to score points by rolling a heavy ball along a flat surface, to gain as many shots as possible by getting their bowls nearer to the jack than their opponents, and so outscore them. The game is a modern variation on lawn bowls, from which the game is derived.

Short mat bowls is played indoors, so it is an all-year sport that is not affected by weather conditions. Because the equipment is transportable and easy to set up, it is particularly appropriate for locations that are also used for other purposes such as village halls, schools, and sports and social clubs.

The rink mat length is 40–45 ft (12–14 m) with a width of 6 ft (1.8 m). The mat is foam or rubber-backed, and has the required lines permanently marked. A wooden fender is placed at both ends to keep the bowls from rolling off the mat. A block sits in the middle of the mat which players have to avoid when their bowls travel down the mat. The 'jack' is the target that sits near the end of the mat.

How the game is played

Short mat bowls is very similar to lawn bowls in that the object is for each player, or team, to take turns rolling bowls down a mat to get as many of the bowls as possible closer to the target (the 'jack') than the opponent.

Any bowls that touch the block, or land in the ditch or dead area, are dead and are removed before the next bowl.

The skill in playing short mat bowls comes from the bias of the ball and the inconsistent playing surface; both the performance of the rink mat and the floor surface can vary between matches in different venues.

Short mat bowls has a variable length of play.

Unlike its close relatives, in short mat bowls the winning skip simply places the jack on a 'jack line' to determine the length of the next end.

Crown Green Bowls (or Crown Green as it is commonly known) is a code of Bowls played outdoors on grass or an artificial surface, known as a bowling green. The sport’s name is derived from the intentionally convex or uneven nature of the bowling green which is traditionally formed with a raised centre known as the crown. Crown Green bowls is played in the Midlands, the Northern half of England, North Wales and the Isle of Man. There are, currently, some 200,000 participating members and some 3,000 clubs.

The game shall be played on a green by, primarily, two players each having two bowls, normally playing alternately until each shall have delivered both bowls, the object being to play the bowls as near as possible to the jack (a smaller target). When delivering a bowl or jack, the player must place one foot on the mat to ensure that all bowls and jack are delivered from the same spot.

A full game comprises a number of ends. An end is where the jack is delivered first and which has to be bowled a distance of at least 19 metres. The player delivering the jack can choose to deliver it wherever they like on the bowling green.  This ability to bowl an end in any direction is a unique feature of Crown Green Bowls. Players then take it in turn to deliver each of their bowls towards the jack. An end is completed when all bowls have been so delivered. At the amateur level, it is usual for several games to be played simultaneously on one green. If two moving bowls collide, both are returned to be replayed. Should a ‘moving’ bowl collide with a stationary bowl or jack in another game, the ‘moving’ bowl is returned and replayed with the stationary bowl struck, replaced as close as possible to where contact was made.

The aim of an end is for a player to complete with their own bowls closer to the jack than those of their opponent. For each bowl that is closer than those of their opponent, a player scores one point. Each player usually has two bowls allowing a maximum of two points on each end. The winner of the end delivers the jack the following end. A score of one or two is signalled to the two markers (one from each team in a team match and who must sit together) by raising one or both arms.

Competitive games are usually held between two people with the winner being the first person to accumulate 21 points. An unlimited number of ends are played until someone wins. Variations exist where players can have more than two bowls, games are played to 31 points (and on rare occasions 41 points) or players form teams of two or more players.

Greens are usually rectangular or square, but L-shaped and circular greens do exist. The surfaces also often feature ridges, hollows and slopes to make the game more difficult. Due to this vast array of historical differences, no rules stipulating the shape, size or height of the crown are laid down.

In Crown Green Bowls, players’ bowls are commonly known as ‘woods’. There is no requirement for official markings on the bowls or woods, although manufacturers’ branding and the weight of the bowls are common. Players often have their initials or some other form of identification on one side to identify their bowls. One side of the bowl has an indent or dimple allowing the player to identify by touch which side of the bowl has the bias.

Crown Green bowls come in a variety of bias strengths, weights, densities, sizes, materials and colours. The minimum weight is 2lb (907gms) but there is no limit to the maximum weight.

Bowls are referred to and sold by their weight and are available from 2lb 0oz to 2lb 14oz, in 2oz increments. They were traditionally made from lignum vitae wood but are now manufactured from a composite plastic. Wooden bowls have a variable density throughout their core due to the nature of wood. Plastic bowls have a consistent and regular density throughout and manufacturers can produce bowls in different densities generally known as standard, low density and high density. This means that a smaller bowl with a higher density can be the same weight as a larger bowl with a lighter density.

The jack, also commonly known as ‘the block’, is a smaller version of the bowls used by each player in a game of Crown Green Bowls and is also biased. There are specifications determining the size, weight and bias strength of jacks. All jacks shall be re-tested at not more than seven yearly intervals. Jacks are not to be stamped on more than four occasions. The first three, in date order, to be made on the bias side, with the fourth and final one being made on the non-bias side. The expiry date on that stamp will indicate the year after which the jack is no longer legal. To be able to be used in an official British Crown Green Bowling Association recognised League match or Competition, jacks must be black, white or yellow. Other coloured jacks may be used in practice.

Jacks have different markings on each side. On one side, there is a single circle with the manufacturer’s name and other official lettering. This side of the jack is the side with the bias. The other side has a single circle surrounded by three solid dots or smaller circles indicating the non-bias side. Official jacks measure 9·5cms (3¾ inches) in diameter and weigh about 660grams (1lb 7oz).

The mat is also known as the ‘footer’. It is usually black in colour and has a textured top surface to assist with grip. It is a simple rubber circular mat of not less than 128mm (5 inches) and not more than 154mm (6inches) in diameter. When delivering a jack or bowl, players must place their non-leading foot on the mat. Nothing in this Law shall apply to any player who suffers a permanent disability of a limb (a Medical Certificate or Doctor’s Note shall be produced as confirmation).

The Laws of the game and interpretation thereof are the responsibility of the sport’s governing body, namely, the British Crown Green Bowling Association.

Have a look what's available from our governing bodies

Receive the latest news and events information from BowlsWales. Read our most recent newsletters here.

Thanks for subscribing to BowlsWales! Please check your email for further instructions.

Something went wrong. Please check your entries and try again.

By providing us with your contact details, you are agreeing that they can be used to let you know more about the work of BowlsWales. With GDPR regulations now in force we want to reassure you that we only keep your data for the purpose for which you have subscribed, and that you can unsubscribe at any time by clicking the unsubscribe button at the bottom of our email or by contacting enquiries@bowlswales.com.

No Tweets available. Login as Admin to see more details.
Password Reset
Please enter your e-mail address. You will receive a new password via e-mail.