Glasgow Indoor Bowls Club hosted the British Isles Visually Impaired Bowls Championship from 6 – 8 October. This event was marked as one of the final selection events ahead of the Commonwealth Games and so performance was crucial.

Welsh Team Manager John Wilson said “Although we have a much smaller team than England and Scotland, it is a side full of quality bowlers and potential is high. I am confident that we will secure medals and punch well above our weight. The players are contesting for places and will show their quality”.

Over the three days of competition, the standard of bowling was very high. Two of our players, Julie Thomas and Jack Lloyd won every one of their games and secured Gold medals. Julie retained her title for the second time and Jack won his first title.

Wales entered 7 categories for medals and came away with 6. An amazing achievement and certainly sets out the case for many players for possible Commonwealth consideration.

John Wilson, Team Manager said “I am elated by the team performances and bringing home six medals out of seven categories entered. There were some outstanding performances and still more potential. Julie retaining her title is an amazing feat, always harder second time around and new medal winning performances have made me immensely proud of the whole Team. Well done all”. 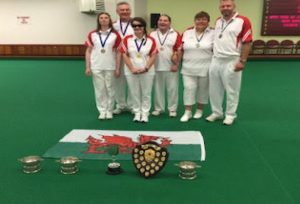 Following today’s Welsh Government announcement there is no change to participating in bowls....

Following the release of the Welsh Government guidance for returning post firebreak, we can confirm...

The Welsh Government have announced that they will introduce a two week “fire-break” national lockdo...

Regular review of the Company Articles is a normal part of any good governance process, as the Bowls...

Richard Bowen steps down as a Director of BowlsWales

Richard Bowen has stepped down from the board of BowlsWales, having decided not to renew his Directo...