After a two year absence the Crown Green world in Wales was pleased to hold the Junior Merit Final – this year at Abergele Bowling Club on Sunday 29th May. The event was well attended, as you might expect, and Abergele welcomed parents, grand-parents, past Presidents of the WCGBA and BCGBA, officials and sixteen excited players. Entries were much reduced with Covid preventing this event, meaning that many former junior players were now no longer eligible to enter.

Our host was Deputy President of the WCGBA, Jack Hunt with current President, Simon Walker, Patron John Percy and WCGBA Management members in support throughout the day. Referees, under the organisation of DT Evans worked hard as always.

There were two girls in the line up, Cerys Parry (Llanfair PG) and Amelia Northop (Dwygyfylchi). Unfortunately, both were to lose their first round games, but more than held their own against James Todd (Penmaenmawr) and Louis Parker Jones (Esclusham) respectively. James won 21-11 and Louis 21-9. Previous champion Ryan Williams (Penmaenmawr) had a comfortable 21-11 win over Sion Hughes (LlanfairPG)  . Other first round winners were Jacob Jones (Esclusham) 21-16 against Ben Turner Renshaw, Daniel Roberts (Esclusham) 21-19 against Jake Parker Jones (Esclusham), Haydn Williams 21-1, Finley Hornbery (Fron Park) 21-17 against Cai Thomas (Llanfair PG). Kian Thomas (Esclusham) had a bye.

In Round two, Jacob Jones met James Todd. James stormed away to an early lead of 11-0. With the block in his hand, Jacob pulled back a few points. However, there was no holding James who ran out game 21-14. In Daniel and Ryan’s game, Daniel led the way for a great part of the match. Ryan wasn’t far behind and eventually dug in to go 20-16 in front. Daniel proved a worthy opponent at times with some very accurate striking, but was to lose 21-17 in the end. Louis Parker Jones and Haydn had a good solid game with Haydn eventually winning 21-14. In the last game of Round two, Kian was to have no easy ride against Finley. A score of 16-9 to Kian at the half way stage belies his far from easy path. In the end, a strong and determined Finley pulled ahead and won to 21-17.

In the first Semi final, the two ‘veterans’ James Todd and Ryan Williams had a spirited and excellent game. James had some hard luck and couldn’t find his earlier form. Ryan led the way to a 21-8 win and a place, once again, in a Junior Merit final. In the second  match, Finley stepped out confidently and led 7-0 in no time at all. Haydn then found his mojo and picked up a few chalks. Finley ran out game 21-13.

In the final, Finley won the toss but Ryan seemed determined to take the Junior title again.. He set up a commanding 13-5 lead and despite quite a few of Finley’s shots achingly close to taking the end, luck was not with him. He certainly made Ryan work hard for each chalk. Ryan won 21-12 and scooped the title for the third time.

The high standard of bowling displayed by all the juniors never fails to impress those who are there to watch. As Deputy WCGBA President, Jack Hunt said in his address at the close of the day they are ‘the games’ future’.

Cerys Parry will represent Wales in the BCGBA Junior Ladies competition later in the season and Ryan Williams and Finley qualify for the British Junior Merit final in August. 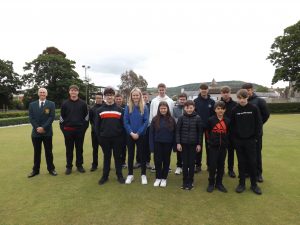 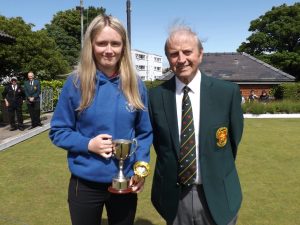 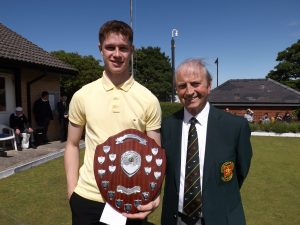 First of all, a huge thank you to everyone that has expressed an interest in the review so far and,...

On Wednesday 8th June, Team Wales announced the 14 players  that have been selected to represent Tea...

After a two year absence the Crown Green world in Wales was pleased to hold the Junior Merit Final –...

BowlsWales has announced that Finance Director, Ashely Kindred has retired from the BowlsWales Board...