Sunday 11th July 2021 and it was the turn of the Welsh Juniors to step up for this years’ Merit. The event was held at Highbury BC, Prestatyn and hosted by 2021 Deputy President of the WCGBA, Jack Hunt – no stranger at the top of the game, having won the Welsh Senior Merit, The British Senior Merit and Crown King in the same year back in 1979. Jack is a strong advocate of Junior bowling and was clearly delighted with the event.

Once again the nu 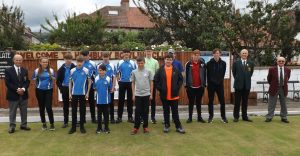 mber of entries was greatly reduced with only 13 players in place of the usual 32. Our, Prseident Simon  Walker was Master of Ceremonies and the WCGBA Patron John Percy and former BCGBA President Peter Higham also attended.

There was only one girl amongst the line up, young Jess Lacey, but it wasn’t to be her day and she struggled with a very strong opponent in the first round.

Highbury is a big green, but this did not seem to daunt most of the players – almost all of whom are Wales Junior County Squad players.

The first four games saw some commanding leads with good wins for Kian Thomas 21-9 in his first game, Daniel Roberts 21-10 and Fin Hormbrey 21-7. The closest games was at number three and five where Hedd Owen just pipped Haiden Williams 21-20, and Cody Edwards also won 21-20 against Lucas King. Due to the entry numbers and the draw, three players had byes in the opening round before they could show the spectators what they were made of.

Fin Hormbrey stormed away to a 12-0 start in his quarter final game against Hedd Owen. Hedd edged his way back to 10-15 down. Regaining the block, Fin returned to the corner he had played so well before and won 21-11. Jacob Jones, who had a bye in Round one, also got off to a strong lead to win his game against Cody Edwards 21-15 despite a spirited comeback in the middle of the game. Kian Thomas cruised his way through his quarter-final with Daniel Roberts 21-9.  The last quarter-final was between Ryan P Willliams ( the 2019 Junior Merit winner ) and Jake Parker Jones. Ryan played a steady game to win 21-15.

In the first of the semi-finals, Kian Thomas and Fin Hormbrey were neck and neck for part of the way. Fin Hormbrey – who had played in the final in 2019 – was unable to replicate his earlier form and lost to Kian 21-18. In the second semi-final Ryan lead away strongly to a 12-7 lead over Jacob Jones, but Jacob was not about to let him get away scot free and began to edge his way back and was only a few chalks behind. At this stage, Ryan ‘put his foot on the gas’ and ran out 21-15.

The stage was set for an interesting final. Kian won the toss and lead the way to a breath-taking 17-10 lead. Precision is everything to these young players, who are not happy unless they have at least one of their woods sitting on the jack. There was some stunning shots from both players who seemed to find a gap where, surely non existed, to win an end. Kian must have felt the world had stopped for him when Ryan eventually turned up the heat and ended the game with a  21-17win. On an afternoon where the standard of bowling just got better and better, we had a worthy winner. Ryan and Kian will now represent Wales at the BCGBA Junior Competition on Saturday 14th August 2021.

Photo show – All the players with WCGBA Deputy President, Jack Hunt on the left. President Simon Walker and Past British President Peter Higham on the right.

The 2021 Ladies Merit Final was held on Sunday 25th July at Mancot BC as part of the Events Research...

The 2021 Senior Merit Final was held at Argoed Bowling Club in Flintshire. In front of a much reduce...

The National Governing Bodies and BowlsWales Launch a National Campaign

The COVID-19 pandemic has hit communities across Wales hard and as a result, sport in the community...