It may be getting to the close of the 2018 season, but the ‘dragon’, it seems is not ready to hibernate. At the Waterloo Champion of Champions event in Blackpool at the weekend, Wales had much to celebrate and be proud of.

In the men’s competition on Saturday 29th September John Bailey and Mathew Worden were flying the flag for Wales and they passed the baton to Linda Williams and Sarah Nicholas for the Ladies competition on the Sunday.

The men’s event hosted an impressive field with some of the games’ best bowlers from across the Crown Green world.

Young Mathew Worden displayed a maturity and determination beyond his years stepping out at number six. He beat Nick Wyer ( Staffs Merit winner ) 21-12 in the first round. In his next game, Matty led the way against Dean Missere ( Sandal Classic winner ) winning 21-16. This took him into his first Champions Quarter Final. Here he came up against Kevan Shaw (Spring Waterloo Champion ). The bowling was breathtaking from both players, and Kevan had to work hard to take any points from Matty. In the end he beat Matty 21-20. What a season this young man has had. Runner up at the Junior Welsh Merit and Winner of the British Junior Merit. Matty also took himself to a semi final place at the Autumn Waterloo Competition and now a quarter final place at the Champion of Champions. He will, no doubt, leave his name on some prestigious trophies in the future and Grandad, Dave will need a good supply of pens for marking.

Seasoned player John Bailey was placed in the middle of the field. First opponent up was Danny Barwise ( Merseyside Meirt winner ) John won 21-20. In round two he was to take one of the big scalps of the day beating Wayne Ditchfield ( NLF Merit winner) 21-14. There was no stopping John in the quarter final either. He beat Darren Plenderleith (North Mids. Merit winner ) 21-8. In the semi final it was to be Matt Gilmore next. John won 21-16. Having won this title back in 2007 and been runner up, he was going for gold. Kevan Shaw found himself in John’s sights. A thoroughly entertaining final, it was all on the last end. You could have heard a pin drop. In one of the Waterloo’s challenging corners, John bowled brilliantly and accurately to end it 21-20. Surrounded by his family, he looked stunned but elated to be this years Champion of Champions.

The Ladies Champion of Champions on the Sunday was no less exciting and deserves a lot more support. Both our ladies were in the lower part of the draw. Sarah Nicolas was the first lady from Wales to head out. Sarah – the British Ladies Champion this year – met Tracey Moseley ( Spring Stretton Anglesey Winner ) who she beat comfortably 21-4. In her second game, she took on the British Ladies President and Cheshire Merit winner, Sylvia Bradbury. It was to be another single figure win 21-9. This earned Sarah a place in the Quarter final where she met Samantha Murray ( South Staffs Merit ). This time, her opponent reached double figures, but Sarah soon triumphed 21-17. This brought her face to face with fellow Welsh lady Linda Williams in the Semi Final.

Linda, meanwhile, had seen off Maliza Herbert ( War & Worcs Meir ) in her first game 21-9. Second game was to be against Janet Monk ( IOM Meirt ). Linda won comfortably 21-10. In the Quarter final she met Debbie Whitworth ( S. Cheshire Merit ) and won 21-16. Now it was Sarah Nicholas.

Sarah played a tidy game across the green, whilst Linda was happiest in the corners. Linda went 11-6 up. There was some superb bowling by both players with Sarah beating some brilliant bowls by Linda. Linda then started to stretch a commanding lead, and showed the true champion she is by giving Sarah no chance to pull level. She beat Sarah 21-9.

So Linda found herself in the final once more. She won this title in 2010 and was to meet last years winner Lindsey Gorman ( Merseyside Merit ) in the final. The match started off point for point and for the first seven ends there was nothing to choose between these two great players. It was all a matter of style, across the green or corners.

Lindsey was to nudge ahead 13-10. Linda then picked up a few points to make the score 15-14 in her favour. At 17 across, Linda must have seen the trophy in her sights and stretched her lead to 20-17. Lindsey, however was not to be taken that easily and fought back to 20-19. It was another nail biting final end for the dragon watchers, but Linda made it to 21-19. 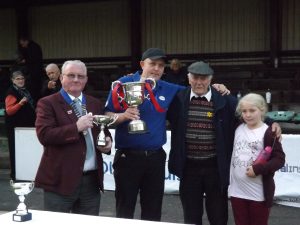 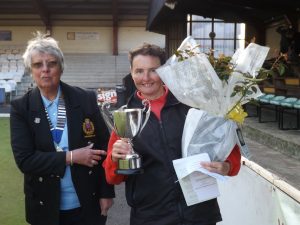 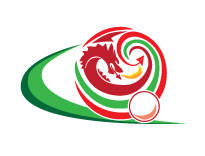